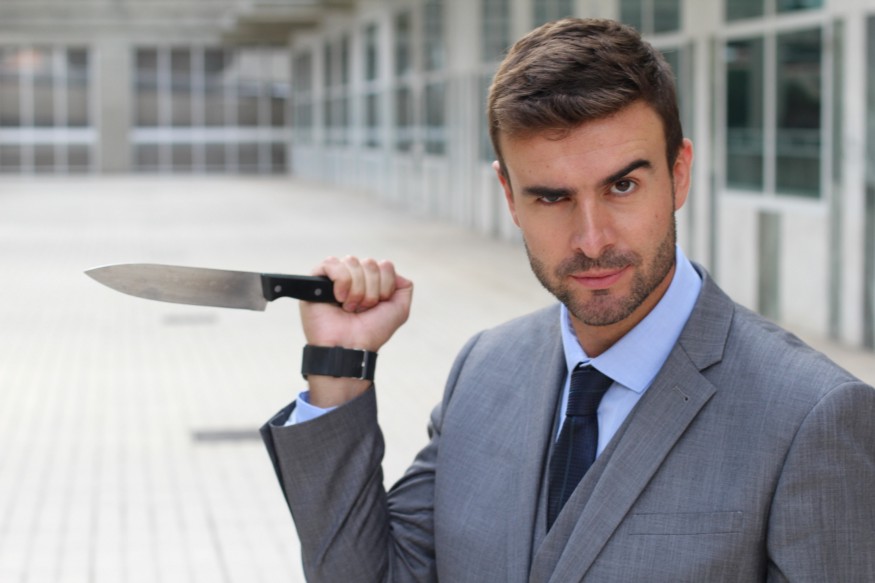 14 Sep People You Should Never Hire

Posted at 02:17h in Uncategorized by seeingbehindthemask

Every employer has an obligation to create a safe workplace. Would you employ someone who likes to set fires? There are some job candidates who are the equivalent of a psychological arsonist. But they’re hard to recognize.

This is the first in a series of articles designed to alert prospective employers to people who are genuinely dangerous. Severe caution is required.

Some people will have a one or perhaps several of the characteristics described. It would be an error to conclude the person is a psychopath. Doing so requires specialized professional training. While you may describe the behaviour of someone you work with, avoid calling anyone a psychopath.

The Psychopath in the Office

The term “psychopath” usually evokes the impression of person who, if not in jail, should be. Perhaps the most modern and well-known characterization is Hannibal Lector, popularized in several movies.

More recent literature on the psychopath describes those who is attracted to white collar jobs. Such people can appear to be very successful working in even senior managerial or leadership roles.

About one per cent of the population are true psychopaths. One of the leading experts in this field, Robert Hare, estimates that up three percent of people in business may be psychopathic.

What Makes the Psychopath Tick

These people are marked by a huge degree of charm. The psychopath is an expert at playing the corporate game. They know how to make a good impression, understand how to avoid responsibility and are skillful at blaming others.

Skillful manipulators, they are expert at managing up. Teammates and subordinates are usually the first to recognize that something isn’t quite right.

Among the things that are wrong is an unending willingness to bend rules to suit themselves. They will have no hesitation about lying, using other people to advance their agenda, or playing one person against another.

The psychopath is overwhelming self-centered. Their approach to life is based on meeting their needs, with almost no concern about the welfare of others. They are inherently selfish and lack any genuine remorse for their actions.

The Challenges of Evaluating Job Candidates

The interview is a rigged game in which the applicant starts out holding all the cards. They are there to sell themselves. They have every motivation to show you their best selves, and to keep hidden any skeletons that may be rattling around in their closet. (And who doesn’t have at least a couple tucked away somewhere?)

We tend to make a very quick assessments of another person’s “likeability”. Often this takes place within a few minutes of meeting them. Once this impression is formed, we tend to discard data that contradicts this, and place more weight on information that confirms it.

Ten Things to Look for in the Interview

There are a number of characteristics to look for. Each of these is of concern by themselves. The more you find, the greater is the danger that this candidate may be a danger.

1. The first warning sign is when the interviewer or hiring team report that “This person will be great!” even after only a superficial meeting.

2. This person will invariably come across as smooth, polished and persuasive. Often an entertaining conversationalist, they can seem well informed. Their comments will be often sprinkled with business phrases and buzzwords that might impress the less well informed.

3. Look for answers that sound complete but on closer inspection, really aren’t. It takes very attentive listening to spot the small gaps in the story. Listen for phrases that gloss over important information. “It just seemed the right time to move on” or “I felt I had outgrown that company” are non-answers that give away nothing about the person.

4. Successful people in business can point to results, not just activity. Be alert for someone who can appear busy, but for whom concrete, verifiable results seem elusive.

5.. The psychopath can appear other centered. They quickly win your trust. “Instant rapport” makes the candidate seem irresistible.

6. Probe for examples of when their results or recommendations are challenged. Look for an indication that the person can acknowledge they were wrong, or that others had a better idea. Do you know anyone who has never been wrong?

7. Look for a tendency to blame others. At the interview this may be factors like “the marketplace”; or “the competition”. At first glance this these may appear to be plausible. However, when you see a theme that nothing is ever their fault, be alert.

9. Examine the extent to which this person can demonstrate a genuine sense of empathy. The person who fails to see the harm done by their behaviour — or by others — can reflect a rather cynical and contemptuous attitude toward people.

10. You may have occasion to ask about friends. Close inspection will often reveal that they have very few, if any, long-term friends.

A middle-aged married father with four children applied for the role of General Manager for Strategic and Business Development at a major retailer. The salary was in the high six figures.

A proffered resume was impressive. He claimed to hold several degrees including a law degree. His last job was the Managing Director of a major fashion house. This was preceded by several senior management roles in the fashion business.

His performance during several interviews conducted by senior executives and the CEO was consistently favorable. Sounds like a dream match.

The result was a disaster.

Remember, he was interviewed and hired by “seasoned pro’s”, each with many years of business experience. If they can be fooled, so can anyone.

At his first day at work, he was fired. His new boss had some lingering doubt, and asked for proof that he worked for another company. The candidate passed this of as a mere oversight, suggesting that he had “proof” at home. He left at lunch, never to return.

Closer checking revealed that he had been employed with a major health firm, and a specialty fashion group, both at considerable salaries. He had been fired from both of these jobs. Other companies he claimed to have worked for had never heard of him. Further investigation found that he had been imprisoned in a different country using a false name.

There was a pattern of, once having been hired, he would deal rudely with staff, going as far as commanding his staff to go out drinking with him and sending them inappropriate text messages.

It isn’t possible to make a diagnosis of psychopathy without actually examining this man. However, simple but competent reference checking should have revealed all of these gaps. It’s unclear why this wasn’t done. At a best guess, and nothing more, I would guess that charm and guile caused this to seem unnecessary.

When something appears to be too good to be true, it usually is.

Despite outward charm, this kind of person is focused on advancing his own interests, using a combination of charm, guile, manipulativeness and overt threats. He has no interest in anyone else’s welfare except his own.

Any contributions to a business will be superficial at best, and the price for these will be exceptionally high. If ever there was a time for extremely careful reference checking, it is when hiring someone at this level in the organization. There should never be an exception to this rule.

Dr. Byrne’s latest book on hiring is Seeing Behind the Mask Before You Hire: Secrets of a Corporate Psychologist (Amazon) Try it. You’ll like it. If it saves you from even one hiring mistake, what would that be worth?